Get fresh music recommendations delivered to your inbox every Friday.
We've updated our Terms of Use. You can review the changes here.

Throw the Lions to the Christians 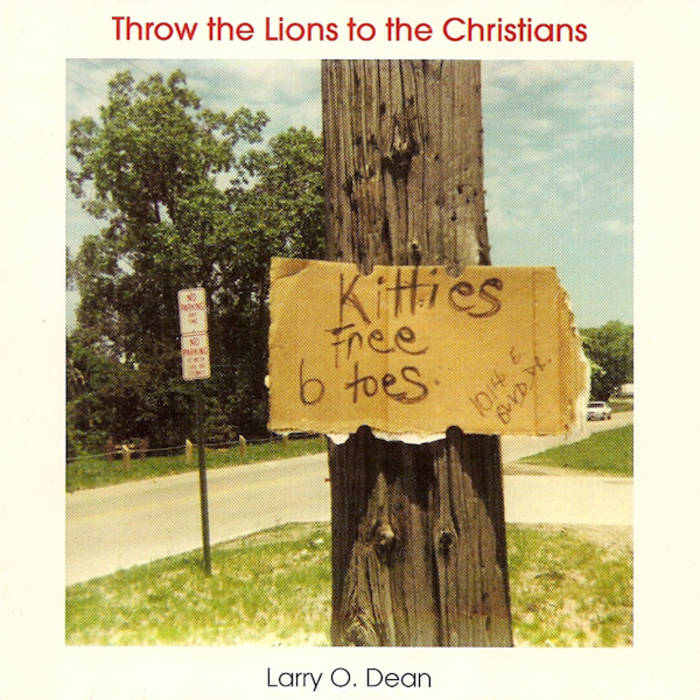 Singer-songwriter Larry O. Dean's fifth solo release, Throw the Lions to the Christians, was his first twenty-four track studio recording, following a quartet of cassette-only releases from the early '90s (Cruel & Unusual Punishment; Prince Charming; The Age of Anxiety; and Centrifugal Farce) created at home on his trusty Fostex four-track recorder, as well as releases by his band at the time, The Fussbudgets, and four collections of poems (Rate of Exchange and Other Poems; Barking up the Wrong Tree; QWERTYUIOP; and Eyes, Ears, Nose & Throat).

TTLTTC was recorded in the mid-90s in San Francisco at Olde West, where The Fussbudgets had recorded their work to date. It features Larry, backed up by such Bay Area luminaries as Lee Bloom (keyboards), Don Cunningham (clarinet), Ned Doherty (bass), Christine (Wall) Freeman (vocals), Kash Killion (cello), Chris Lehmann (vocals), Tony Maxwell (guitar), Ken Richards (vocals), Gabriel Sandino (guitar & vocals), James Schaefer (drums & vocals), and Mark Thomas (vocals). However, its release was delayed due to various circumstances, including the breakup of The Fussbudgets, and Larry's subsequent work with the band that followed in their wake, Malcontent.

In 1995, Larry relocated to Chicago and founded power-pop band, Post Office, whose debut, Public Displays of Affection came out in 1996. Finally released in 1997, TTLTTC was re-sequenced and appended with selected Fussbudgets cuts and Malcontent's sole EP, since that extra material had itself never received a proper release. It received terrific reviews and radio airplay, after which Larry focused attention back on Post Office.

In honor of its fifteenth anniversary, TTLTTC has been restored to its previous sequence, including two never-before-heard tracks, and remastered (by original mastering engineer, Mike Hagler at Kingsize Soundlabs). It kicks off a full-scale remastering/re-issuing campaign by Zenith Beast Records!

Trevor de Brauw of RLYR and Pelican stops by for a chat, plus a tribute to the late Trevor Strnad